MY CART
Product added to cart
in Wish list
Total Products
View my Wishlist
You have no items in your wish list.
Menu
Account
Settings
Ping

PING Shot of the Week

Thriston Lawrence has given himself reason to smile during his best season yet on the DP World Tour. At the Horizon Irish Open, he finished third behind winner Adrian Meronk. It was the South African's fifth top 10, including his break through win at the Joburg Open, a victory that qualified him to compete July 14-17 at his first Open Championship. Among his PING clubs were a G425 Max, G425 Max 3-wood & Glide 4.0 wedges 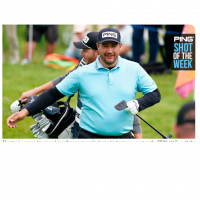